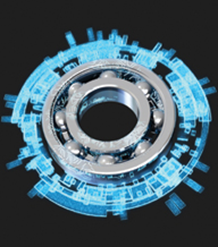 New and innovative technology that revolutionises the way in which engineers use and interface with bearings. This is what the SKF Insight sensor technology is about, integration of a miniature, self-powered and intelligent wireless sensor at the heart of the bearing. It allowes engineers to monitor the operating conditions of a bearing from within a machine, in real time. As a result, bearing wear and potential failure can be planned and prevented, rather than simply being predicted, as was previously the case.

The solution that has been developed uses miniature sensors and intelligent wireless components that are embedded in the bearing and draw their power from the application.
Traditionally, condition monitoring looks for early signs of failure by measuring levels of vibration. Vibration signals are normally produced when the first small fragments of steel begin to spall from the raceway surface of the rings or the rolling elements. By the time this damage reaches the stage where it can be detected using conventional sensors it is already too late, as the bearing has already suffered damage that affects its operating performance and life.
One of the purposes of SKF Insight technology is to make condition monitoring more widely applicable and accessible, particularly in applications where it has been previously been considered impossible or impractical. This is one reason why the technology is in testing in challenging industries such as wind power, rail and steel manufacturing.

A fine example of what State of the Art sensor technology is enabling to fulfill for industrial applications in the domain of complex machinery.