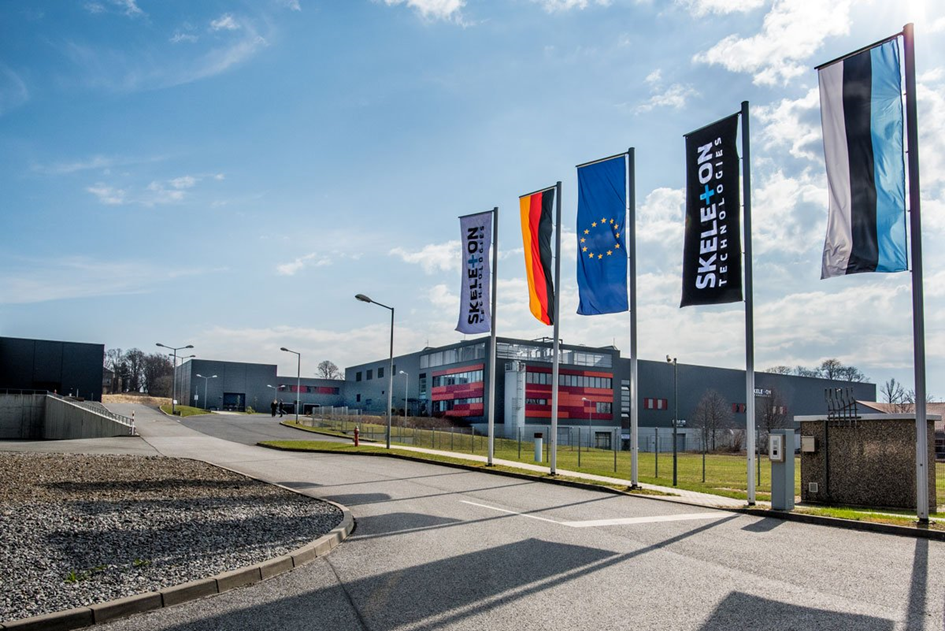 Skeleton Technologies‘ production facility in Grossröhrsdorf, Germany, is located in a cluster of high-tech manufacturing companies, in an area known colloquially as Silicon Saxony. In fact, the availability of skilled workforce and existing infrastructure were some of the key reasons behind Skeleton deciding on the location of the new production facility in Saxony.

Ants Vill, Skeleton Technologies’ VP of Product, has been in charge of setting up Skeleton’s first production line in Estonia, and in 2017, together with his team planned and engineered the move to Germany. Mr Vill explains the complexities of ultracapacitor production:

“Although ultracapacitors are relatively simple devices – just aluminium, carbon, paper, and an electrolyte – it’s difficult to make consistently high quality products. In our case it’s even more difficult, because we also produce modules and systems, which get progressively complicated, and quite often need to be customized to meet customer requirements. The move to Germany enabled a complete redesign of our production line to put even more emphasis on quality and automation, and it has paid off.”

Production capacity increase in the plans

First-time visitors and customers conducting factory audits are often surprised about the size and capabilities of our factory. During the last year, we have been audited by large European and global OEMs, and these audits have been passed successfully. We are also finalizing work on the AITF 16949 automotive quality standard and expecting the certification to be concluded by mid-2020. The ISO 9001 and ISO 14001 certifications will also be joined by the ISO 45001 Occupational Health and Safety standard alongside the AITF standard next summer.

The decision to implement an ERP (Enterprise Resource Planning) system already in 2017 was a major step for Skeleton to help jump-start the production in Germany when the factory was moved from Estonia to Saxony. With track and trace compatibility and full integration to the production line, the ERP system allows us to communicate with customers and suppliers electronically, vastly improving reaction speed and responsiveness.

While already impressive and the largest ultracapacitors factory in Europe, we are working on increasing the manufacturing capacity for the Grossröhrsdorf production facility from half a million to about 1,000,000 ultracapacitors per year in 2020. In terms of footprint, the current 3,500 square meters will be double to about 7,000 square meters by 2020.

Following the scale-up, the plan is to implement the next generation cell design, optimized for automated production and cell assembly. Further automation enables scaling up production capacity to 4,000,000 cells in the first phase, and ultimately to 10,000,000 ultracapacitors to meet demand from automotive, grid, and transportation. 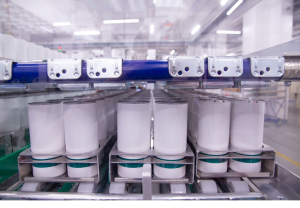 Ultracapacitors waiting for their aluminium casing, filling, and laser-welding.

As far as electrode manufacturing capacity goes, already in 2017 we were producing the equivalent of 2,000,000 ultracapacitors worth of electrode, and can easily double production to 4,000,000 cell equivalents. 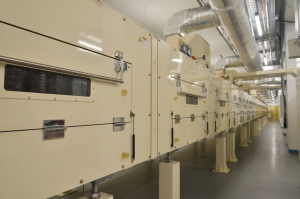 The 55-meter coating line is the largest single piece of machinery in the factory and largest of its kind in the industry.

The custom-design electrode mixing unit in Grossröhrsdorf is currently scaled to about 4,000,000 ultracapacitor cells, fully automated, and highly likely the most advanced mixing unit in the industry. The unit was designed and developed together with an industry specialist system manufacturer to reach faster cycle times than standard machinery can achieve. 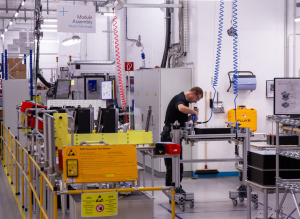 One of the key capabilities we possess is laser-welding, which makes it possible to design a huge variety of sizes and shapes for ultracapacitor modules. On top of in-house laser-welding, we also do all module and systems design an assembly in-house. All of these capabilities are something none of our competitors offer, and provide unparalleled flexibility and quality to our customers.

SkelMod 102V modules in quality testing – an integral part of the production process.

Our module and systems production capacity can be quickly increased by adding lean workstations. The current nominal capacity for for example a 18-cell 48V system is about 500,000 modules per year for the laser-welding machinery, but will of course increase in parallel with the scale-up of the factory.

Industry 4.0 and full automation
Working together with large automotive OEMs, global industrial giants, and national grid operators demands a high level of quality control and constant upgrades and improvements in the production process.

The scale-up of our Grossröhrsdorf production facility to a fully automatized factory utilizing industry 4.0 quality control and production settings is no small feat for a company as young as ours. With the most modern and one of the largest ultracapacitor factories anywhere in the world, Skeleton is ideally positioned to drive electrification in industries across the board for years to come. A smart ultracapacitor factory is the key element in competing with the cost-down trend in electrification and electric vehicle production.

“In two years we have built the most modern and efficient ultracapacitor factory in the world, and the scale-up plan will increase our capacity to meet the demand created by electrification. The success of Skeleton is based on a commitment to high-quality manufacturing, and combining German engineering and production know-how with Estonian IT expertise”, Ants Vill concludes.

For more information about Skeleton Technologies or their ultracapacitors, please contact Nijkerk Electronics.