NI TestScale, based on modular, off-the-shelf hardware, is aimed at testing high-volume PCBs for high-volume consumer, medical and other electronic devices. Customers can put digital and analogue I/O and power modules into a backplane that connects via USB to a PC with application software to test PCBs before they leave the factory. The modules can be installed in custom configurations to meet different functional testing needs. NI plans to add other instrument modules in the future. TestScale fills a gap in NI's product portfolio for test engineers and system integrators. TestScale fits where NI's PXI-based high-performance automated test equipment is over the top for the task at hand.

Check the functionality of the final product

One of the final steps in manufacturing a printed circuit board is functional testing, which checks the functionality of the final product and its compliance with specifications. During functional testing, the circuit board is subjected to a series of electrical signals and power supplies that simulate operating conditions. Depending on the complexity of the PCB and the customer's requirements, these tests may simply check whether or not the product can be switched on, or go into depth to check whether the product is functionally safe and secure.

Distribute the functional testing over stages

In many cases, companies have to run the full range of tests required for the finished circuit board—called “test coverage”—with huge racks of high-end test equipment.. NI TestScale will give its customers the ability to distribute the functional testing over several different stages to keep costs low, with each station testing a different aspect of the board’s design. 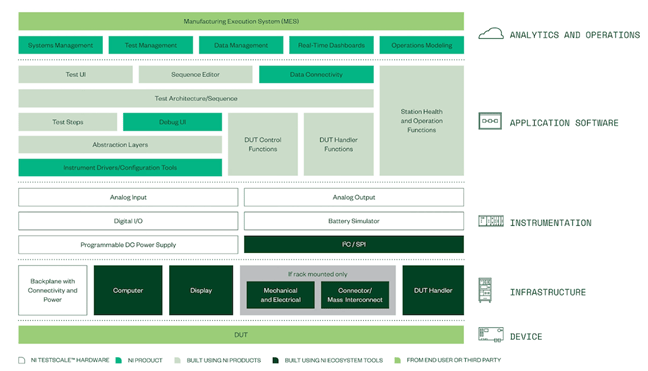 With its smaller footprint TestScale is also very flexible, allowing its customers to swap the test modules in and out more rapidly and replicate test systems to scale up production more affordably. The small form factor also allows the TestScale hardware to be mounted inside the test system, placing it directly under the device being tested, saving valuable space on the factory floor. Mounting the test system as close to the PCB as possible creates shorter signal paths to help simplify wiring in the system. This also reduces failure points, with better quality and reliability versus custom board-level hardware.

The in-fixture architecture reduces footprint of the final test system by up to 50%. It also reduces the test station cost by up to 40% compared to standard rack-based box instruments. The hardware connects to NI and third-party software such as TestStand, LabVIEW, and Python using the  NI-DAQmx library. It also supports a broad range of Linux distributions for desktop PCs.

C.N. Rood is a leader in knowledge and solutions in the field of test and measurement equipment. Since 1938 we distinguish ourselves with a personal and customer-oriented approach. We think along with, advise and assist our customers in making the right choice in their test and measurement equipment. Amongst others we work for government, science, education, aerospace and automotive industries in Northern Europe and the Benelux. From offices in Stockholm (Sweden), Zoetermeer (Netherlands) and Zellik (Belgium), more than forty dedicated professionals work on solutions ranging from communication test equipment and general test and measurement instruments to equipment for data acquisition, logistics automation, complemented by consultancy, training and turnkey solutions.