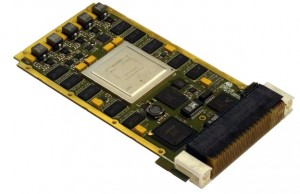 The AcQ Inducom “Medusa” VPX3424 is a 3U OpenVPX™ (VITA 65) Single Board Computer (SBC) featuring the all-new T4240 QorIQ® Processor from Freescale Semiconductor. This 12-core, 24-thread processor running at up to 1.8GHz is based on the e6500 core with AltiVec® technology and offers the cutting edge of both performance (up to 216 GFlops) and power efficiency. With up to 12GB DDR3 RAM with ECC and a range of fast interconnects, it forms the beating heart of this new board, bringing you unparalleled performance

User-Programmable FPGA
The Medusa has a Xilinx Kintex-7, user-programmable FPGA and dozens of customizable OpenVPX™ user I/O pins, allowing you to add support for application specific interfaces or offload specialized tasks to the FPGA. The user-programmable FPGA adds great flexibility to meet your design needs and opportunities for a single-board solution. Due to a fast communication interface (PCIe 4x) between the T4240 and the FPGA, the FPGA can be used for pre-processing, video/image processing or adding extra functionality

Software Support
Support for VxWorks®, Integrity®, PikeOS™ and Linux is planned for the Medusa, as well as an OS-less BSP. Other Operating Systems are available on request. Each supported software environment comes with extensive documentation, example software, compiler and IDE. Furthermore, a development kit will be available for the on-board user-programmable FPGA with code examples and documentation to kick-start your firmware development. 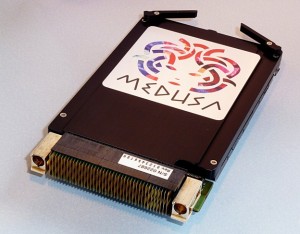 Small Form Factor System
A conduction cooled ruggedized REDI (VITA 48) variant of the Medusa is available as part of the upcoming AcQ Inducom OpenVPX™-based small form factor system (VITA 75), a highly modular and extendable platform for a range of embedded applications. This system brings together an optimized combination of performance and SWaP. AcQ Inducom offers a wide range of boards for this system using the OpenVPX™ (VITA 65) architecture. These boards include I/O, networking and audio functionality. A PMC/XMC carrier (VPX3001) is also available. Contact us for more details on this system and how it can meet your application’s needs

Since the establishment in 1985, AcQ Inducom has emerged into a very successful and modern organization with a team of enthusiastic specialists, who are willing to go to the limit day after day to achieve their goal: the successful completion of projects.

The company develops, produces and delivers solutions for a wide range of embedded electronics applied in aerospace, military, test & measurement, transportation and industrial automation. In most cases this involves the design, building and delivery of embedded real-time hardware- and software components.

Some of the strengths of AcQ Inducom are fast prototyping, safety-critical designs, form-fit-function replacements for discontinued products and long product life cycles.

The company has the know-how to set up a complete development project from begin to end, from the formulation of the problem requirements via design and development to implementation and support, according to IEC61508, EN50155, ED80/DO-254 or ED12/DO-178B if required. Fields of knowledge include small stand-alone embedded systems, VMEbus, CompactPCI, PMC, PCI and M-module, as well as MIL-STD-1553 (STANAG 3838/3910), ARINC-429 and CANbus.

Products are used in aircrafts and simulators, control systems for trams and trains, traffic control installations, telecommunication networks, industrial automation and automotive. Worldwide sales are established both direct as well as through an international network of distributors.

In the course of time the activities of AcQ Inducom in the aerospace market have increased substantially. The product folio includes several products for aerospace applications, for example a general purpose cockpit display, an intelligent remote data concentrator and a serial actuator. AcQ Inducom also participates in 7th framework programs, such as SCARLETT and Actuation 2015.