DIFFMAG sensor is the unexpected breakthrough in magnetic detection of the sentinel node in the case of head/neck cancer. Bennie ten Haken will give a keynote lecture about the IronNanoLoc Project at Sense of Contact 18. 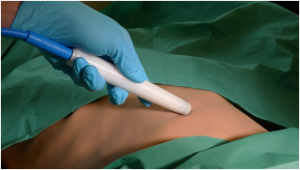 “It almost sound arrogant to say you have discovered something new regarding magnetic detection”  Bennie ten Haken, groupleader magenetic detection of the MIRA Institute for Biomedical Technology and Technical Medice, is full of enthusiasm. His group has patented a technology which makes it possible to “use nano particles the size of one small ferromagnetic Weiss area with iron oxide – rust – to build a biomarker which is used to find a lump and to perform detection while ignoring all other particles in the body. We’re basically getting rid of the patient and are able to find that one specific particle in living body in a very friendly way.”

Unfortunately the technology can’t be used yet in all medical disciplines, because it requires large *** spoelen ***. “ When we met Remco de Bree, head-neck surgeon at the UMC Utrecht Cancer Research Centre, this disadvantage didn’t appear be a restriction. In the head-neck area – where there’s a huge medical urgency – the detection is relatively superficial so you don’t need the large ****.

For this purpose the DIFMAG sensor is in development; Differential Magnetometer. The enthusiasm of Ten Haken is partly caused by acquiring a STW grant for further development and demonstration of the technology and for improving local treatments. Besides the University of Twente, UMC Utrecht and the Radbout University Nijmegen, also industrial partners participate in the IronNanoLoc project. The names of these industrial partners aren’t published yet, but every company that could contribute to this research project can apply for a seat in the ‘user-committee’. Partners that are already financially involved have the right to decide if a company is admitted to this committee.