ESD protection of sensitive electronics via transient voltage suppression (TVS) diodes is becoming a common circuit technique across industries. Signal lines in a circuit that are accessible to humans by touch (such as USB, HDMI, etc.) require ESD protection on all sensitive signal lines that are input to some IC’s. Placement of the ESD protection diodes on the circuit board relative the IC’s they are protecting play a significant role. It is important to understand the behavior of PCB traces of signals at transient conditions such as ESD. As an example, a simple schematic of an I2C bus extender with TVS diodes is shown in Figure 1. 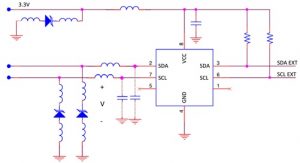 The realistic model of this circuit at transient ESD is shown in Figure 2.

PCB traces will have inductances associated with them based on their length. Consider the SDA signal trace. Trace lengths connecting the following points are very important:

In other words, the ESD protection diode must be placed as close to the pin that it is protecting as possible and its connection to the reference plane must be made as close to the anode pin as possible. Otherwise the trace inductance between any of these points may be large enough that due to the input capacitance of the IC and the stray capacitance of the trace, a tank circuit may form. The tank circuit may oscillate at voltages that can exceed the input voltage capability of the IC and can cause substantial damage to the IC.

for a diode (10Vclamp) that was placed properly with very short traces at all points listed above, thus resulting in very small trace inductances. Figure 4 shows the voltage at the CMOS based input (represented by a capacitor).

To minimize oscillations on I/O lines due to ESD and to avoid IC damage, the following must be assured: